Introduction: Raisin is one of the most nutritious dried fruits and rich in various vitamins, minerals, fiber and antioxidant compounds (Mehraban et al. 2015). Iran is one of the major producers and exporters of raisin in the world. During storage period, raisin turns hard and sticky due to exudates syrup and moisture loss. It has been shown that application of edible coating could be useful to overcome this problem and extend shelf life of this product (Ghasemzadeh et al. 2008). Waxes and vegetable oils have been used to coat raisin (Debiofort et al. 1998) Ayoubi et al (2015) coated raisin with carnuba wax and glycerol monostearate. Also, Ghasemzadeh et al (2008) used edible coating based on starch and pectin to coat raisin.
Sodium alginate is a water-soluble linear polysaccharide derived from alginic acid and has been considered as an edible coating due to its low cost, non-toxicity and biodegradability (Danapal and Associates 2012). In the present study, the effect of edible coating based on sodium alginate to maintain the keeping quality of raisins during storage at 25 °C for 6 months has been investigated.
Materials and methods: raisin was produced from Seedless Asgari grape variety with the soda oil method. It was coated with sodium alginate at levels of 1 and 2%. After coating, samples were packaged in Zip-kip polyethylene bags and stored at 25 °C for 180 days. Physicochemical (weight loss, brix, pH, total phenol, color and hardness), microbial (total count) and sensory (color, texture, taste and overall acceptability) properties were determined during storage in the first day and 45, 90, 135 and 180 days after starting the storage. The weight loss was calculated from the difference between raisin weight in 45, 90, 135 and 180 days with the initial weight. Brix was measured by a refractometer (Protable VBR model, Switzerland). The pH value was measured by a digital pH meter (3020, Jenway, UK). In order to determine the total phenolic contents, the Folin–Ciocalteu method (Taga et al. 1984) was employed and measurements were done at 765 nm with a spectrophotometer (UNICO 2802, China). The color measurement was done using a colorimeter (TES-135A, Taiwan). Hardness of raisins was determined in a puncture test using a QTS texture analyzer (CNS Farnelll, Essex, UK) equipped with a needle probe (stainless steel cylinder of 2 mm in diameter with a conical needle bit) and a test speed of 60 mm/ min during the test. Hardness was defined as the maximum force to puncture raisin from the top to a 2mm depth (Rolle et al. 2011). To determine the total count, pour-plating method was used in PCA medium and incubation was performed at 37 °C. The sensory evaluation was performed by 5-point hedonic scale (1 most disliked, 5 most liked) by 10 trained panelists. The sensory evaluation of all treatments was carried out during storage time (in the first day and 45, 90, 135 and 180 days after storing). A factorial test in completely randomized design with 3 replications was utilized in this study. Analysis of variance (ANOVA) was performed by using MSTAT-C software. Duncan's multiple range test was used to compare the means at the 5% significance level and the graphs were plotted by Microsoft Excel software. 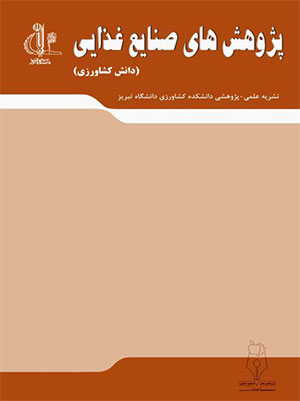